Perhaps a little, but not in the direction that most folks would expect.

My own state of New York is the poster child for demonstrating that the conventional wisdom on this is wrong. We are perennially ranked as worst in business friendly tax climates, but a national study has also consistently ranked our state as first in entrepreneurship in recent years. (And yes, the study uses per capita statistics to adjust for population, so we don't get any breaks on that score!)

Here's a graph that puts the picture in perspective. (Click on the graph for a higher resolution view.) 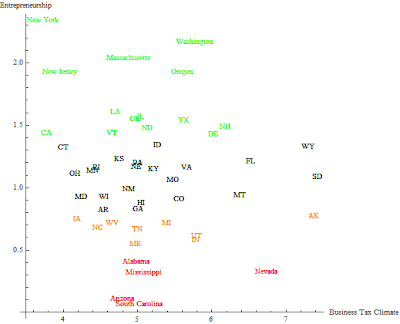 The vertical axis in the graph above shows the State Entrepreneurship Index, computed by the University of Nebraska-Lincoln's Bureau of Business Research (UNL-BBR), recently featured in an article in Bloomberg Business Week. Here is how the UNL-BBR describes their index:

The State Entrepreneurship Index combines five key components -- a state's percentage growth and per capita growth in business establishments, its business formation rate, the number of patents per thousand residents and gross receipts of sole proprietorships and partnerships per capita -- to build its state-by-state rankings.

My own state of New York is at the top left corner of the graph--tops in entrepreneurship, but worst in "business friendly tax climate."

Of course, there are many deviations from that rather weak relationship. Variations in business tax climate account for less than 2% of the variations in the entrepreneurship index.

And, to be sure, the old saw applies: "Correlation does not establish causality." I am certainly NOT making the case that states should go around making their tax systems deliberately less business friendly purely on the grounds that it will encourage entrepreneurship.

But there appears to be little support for the opposite proposition--that is, there is no evidence that states with business friendly tax systems (as measured by the Tax Foundation) encourage entrepreneurship (as measured by the UNL-BBR). Other factors appear to be more important.

Update: I have added more thoughts in a followup post here.
Posted by Mary O'Keeffe at 9:59 AM