The rise and fall of the Refund Anticipation Loan Industry


“We went into it with really good intentions.  Over time what we found is that consumers were very price-insensitive. They didn’t really know what they were paying.”


This weekend's Washington Post has a comprehensive article describing the rise and fall of the Refund Anticipation Loan (RAL) industry, and the strange bedfellow relationship between the IRS and the paid preparers who offered those loans.

As the Washington Post recounts, the RAL industry was born a little over 20 years ago, as the IRS was eager to promote the nascent technology of electronic filing.

People were more eager to efile if they could get instant gratification and the paid preparers facilitated this with their so-called "instant refunds" which were really very high-APR short term loans, collateralized by the expected tax refund.

Part of the reason the fees had to be so high at first was that the lenders were taking on a risk that the refund would not materialize, due to an offsetting liability for a back-tax lien, student loan arrears, or child support arrears.

But apparently, many customers were not aware of the high fees and/or were not deterred by them.  This is not too surprising--their inability to prepare their own tax returns suggested they did not truly understand how much of a refund they were actually entitled to and the description of the fees they were paying was buried in a blizzard of the complicated IRS tax form boilerplate, pages and pages of legal gobbledigook.

I mean--realistically--how many people eagerly anticipating their "instant refunds" actually bother to take the trouble to read and understand even just the paragraph immediately above their required signature on the "authorization to efile" Form 8879 required of each and every taxpayer efiling a return, let alone to attempt to understand the implication of each and every figure on their tax returns and the associated paperwork detailing the fees (which are subtracted from their refunds)? 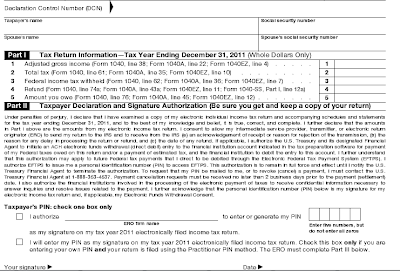 For many years, the IRS facilitated those RALs by providing information to tax preparers and the banks informing them as to potential problems that could destroy the value of the collateral behind the loans, i.e., those offsets for back taxes, unpaid child support, or student loan arrears.  But prices for RALs stayed high even after the IRS started providing this information--apparently the market did not just did not function very well because people were not very aware of the RAL fees buried in their returns.

After a great deal of criticism, the IRS has now ended the practice of providing information to facilitate RALs and bank regulatory authorities have strongly discouraged the banks from offering RALs under the new regime, so RALs are apparently dead.   So is H&R Block's leading franchise competitor, Jackson Hewitt (JTX), whose business model was heavily dependent on RALs and which was delisted from the New York Stock Exchange a year ago and now trades as a penny stock.