Last night's Union College annual volunteer recognition banquet was a deeply moving experience.  Our VITA program is just one of many terrific programs run under the auspices of the Union College Kenney Community Center, and the volunteer banquet was a great opportunity for me to learn more about the wide variety of service done by the students at our college.

There are students who get up early every Saturday morning to scavenge the leftovers saved up by the dining hall that would otherwise go to waste and use their creativity to repurpose them into delicious meals they serve to residents at the City Mission.   There are students volunteering as tutors and mentors at schools and playgrounds all over Schenectady.  Other students take leftover floral centerpieces from college events (including last night's banquet, which had pretty potted flowering plants) to residents they visit at the Schenectady County nursing home, where they will be working with residents to start this year's garden soon.

Two years ago, a former Union VITA student, Jeremy Taglieri, and a fellow Union student, Joe McCarthy, spearheaded a project they called Project Skip (Schenectady Kids Imagine and Play) to raise $84,000 in funds along with recruiting 140 volunteers to work together to totally renovate a run-down park in one of the poorest and most crime-ridden neighborhoods of Schenectady.  (Jeremy clearly caught the "service bug"--he is now a Peace Corps volunteer in Moldova.)  Other students at Union are currently working on spiffing up a park in a low-income neighborhood just a few blocks down from our VITA site.  And this is just the tip of the iceberg--Union College students have worked on Habitat for Humanity homes, helped with flood relief in places ranging from nearby Schoharie County after last summer's devastating floods to efforts that continue in New Orleans.  Still others coach science teams at Schenectady high school or help with a Girl Scout troop.  And the list goes on. 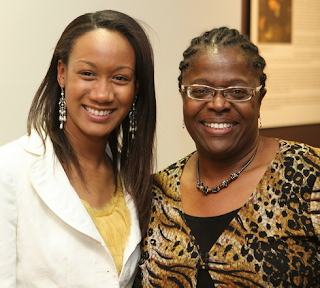 Angela is shown above at last night's banquet with Schenectady's newest City Councillor, Marion Porterfield, who attended last night's banquet and was Angela's Girl Scout leader years ago!  Small world!  Marion also runs a VITA program through the Weed and Seed program based in Hamilton Hill, the same neighborhood where Jeremy's Project Skip playground is located.  Thanks to a conversation I had with Marion at dinner last night, I'm hoping to take a group of what I am calling our "Guerrilla Math Circles" volunteers to launch a new "extreme math" outreach initiative at that playground next month, introducing young children to some "Million Dollar" unsolved math problems that they can explore with sidewalk chalk.  We're hoping to virally inspire others to share these exciting math activities at playgrounds and parks all over Schenectady, Albany, and Troy this summer--and around the country as well.
Posted by Mary O'Keeffe at 8:58 AM