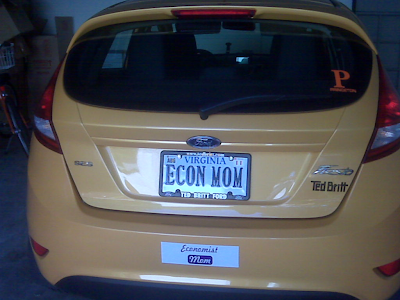 Economist Mom notes that Virginia only charges a fee of $10 for a vanity license plate, one of the lowest rates in the country, and wonders why other states don't follow Virginia's example.

By comparison, New York charges $31.25 per year for a vanity plate.

At a time when virtually every state legislature is diving into the sofa cushions in search of spare change to balance their budgets, it might make sense for more states to follow Virginia's example.

According to this site, 16% of the motor vehicles in Virginia have vanity plates, over one million vehicles! That translates into $10 million a year in extra revenue for Virginia, though there are some costs to handling those special requests. Then again, there is some additional utility involved as well--people like to express themselves with their license plates!

It appears there is a high elasticity of demand. New York has a vanity pentration rate of less than 2.5%, so despite the fact that there are almost twice as many vehicles in New York as in Virginia and despite the fact that New York charges over three times as much per vanity plate as Virginia, they get less than one million dollars a year in vanity plate revenue.
Posted by Mary O'Keeffe at 3:09 PM